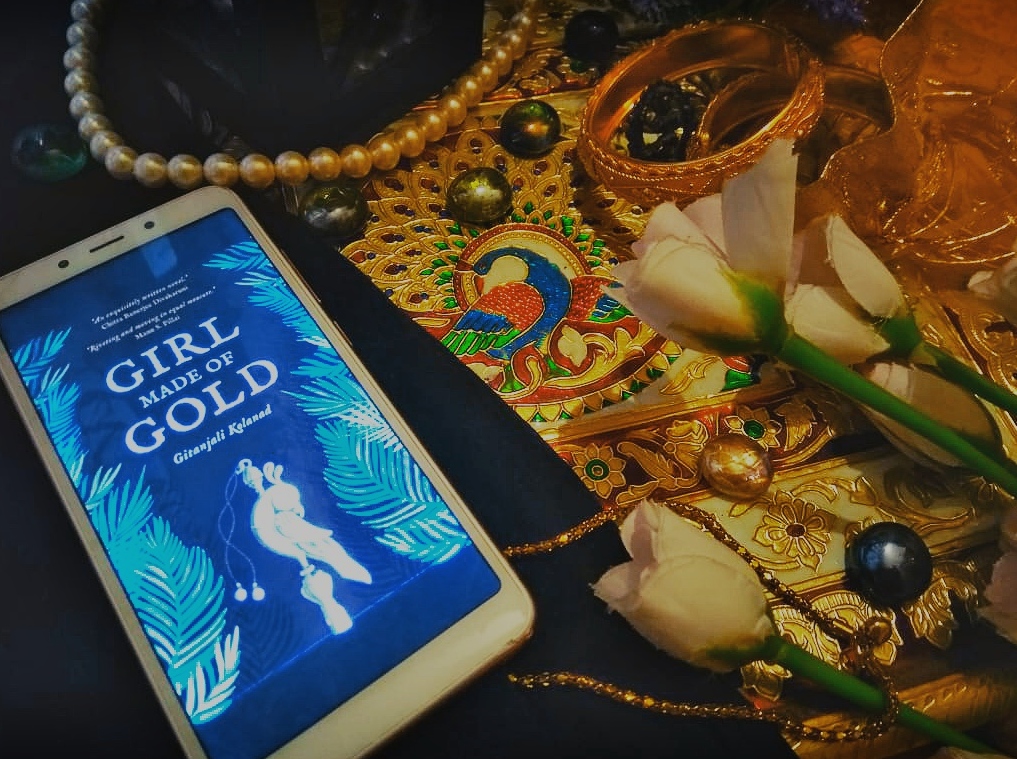 The debut novel of Bharatnatyam dancer, Gitanjali Kolanad is one of the most gripping thrillers I have read lately. The story starts off with a hunter finding a dead corpse near the jungle overlooking a holy village-temple. This is where the unputdownable story of a young Devadasi girl- Kanak starts unfolding.  Kolanad’s expertise in dance widens the scope of descriptive storytelling throughout the book where the narrators at length describe the temple and the village, their facets, the hidden symbolism, and of course their life. The story progresses through the narration of its main characters and traces the cause of the disappearance of young Kanak coupled with the mysterious appearance of a golden statue that looks exactly like her. Girl Made of Gold highlights the Devadasi culture at its peak; and how young girls are betrothed to God and lead a life pleasing men.  But sometimes, some things go wrong. . . . . . or right!

The story progresses as each character connected to Kanak mulls over her disappearance.  Subbu, the young nephew of the village priest is set to find his lost friend; the village priest tries to leverage the situation by turning it into a tourist attraction; Vallabendran, the seat of the aristocracy of the village, is believed to have been after Kanak and win her as his latest possession, shows indifference; and Ratna, Kanak’s elder sister with whom her relations are sour is engulfed in her own world to care any less for her.  A spectrum of characters has been introduced by Kolanad throughout the course of the novel and they have something to hide, which might contribute to her disappearance.

The novel brings to the forefront the ritual of Devadasi which has been traced predominantly in the Temple states of Southern India where a girl is married off to a God and is expected to lead a life of celibacy attending to the temple rituals and excelling in performing arts. However, with time, the ritual has seen many transformations and in some parts, it is being misused as a form of sex-slavery under the garb of a ritual. It is admirable that even in the 21st century, people take to such rituals whole-heartedly or forcibly and make the decisions for young girls. Of late, various criminal activities have also gotten intertwined with the practice of forced Devadasi bringing it under the radar of Human Rights. It makes the readers wonder if a girl really wants to live the life of a celibate?  Does she really want to be seen as the wife of a God? And what about pleasing men as it is considered that every man is a part of God and in doing so; she pleases her husband-God? With the ritual being the central plot of the story, the author compels the readers to think closely about it and yet does not define the moral grounds for the same.

Girl Made of Gold beautifully portrays female characters- their strengths, desires, and follies. It also highlights the way society looks at women. Kanak, talented, and attractive has only desired true love. But the world sees her as nothing more than a Devadasi, one who is meant to serve the Gods and men. Ratna lives the life of the ‘other woman’ as she is given away to Vallabendran, despite him being married. Devyani, the wife of Vallabendran is a dutiful wife and daughter-in-law, who knows of her husband’s illustrious nature and yet keeps quiet all through, serving him. Nagaveni, the matriarch of the Devadasi household holds true to the tradition without understanding how cruel she is to her girls. However, if she has been pushed towards this deep endless well of satisfying others from a young age; she finds it nothing wrong in choosing the same path for her girls.

Kolanad further talks about the innate nature of men and women.  The deepest desire of a man or a woman’s heart is to desire human company. To turn it into friendship, love, care, or lust is the decision of the individual. Kanak, in her life experienced friendship and care from her friend, love from her admirer, and lust from the greedy vultures in the society. Only Kanak’s choice and to some extent her fate makes the decision for her. But the most important point put forward here is that all individuals- men or women- have a choice; it is only a matter of time, their values, and their feelings that lead them to choose one or the other.

The inherent idea of superstition which is most prevalent in the rural communities takes shape firmly in the story. The sudden presence of a golden statue where the village folks were expecting Kanak to be, elevates her status; similar to real-life reportage of idols drinking milk in India which had surfaced a few years ago. Faith and belief are gifts to humanity, but there also exists a fine line between them and superstitions and irrationality. While many would instill faith in irrationality, others may pounce on the opportune moment to take advantage of it, just like the village priest did to lift his position and that of the village, ensuring enough donations from the arriving tourists.

Kolanad has brilliantly depicted the rural life, its nuances, and most importantly the depths of human relations through Girl Made of Gold. It is indeed a page-turner and every page comes with new revelations that are bound to leave the readers wanting for more. The complex web of relationship, intertwined within the members of the Devadasi community, the villagers and the aristocratic household has been kept intact, all the while progressing with the mystery of Kanak’s disappearance.

Girl Made of Gold is definitely a recommendation if you are searching for a good book to read, explore, or love the thriller genre and Indian writing. And I’ m sure you would finish the book and take time to contemplate its brilliance for a while. Indeed a thriller such as this is rare to find and one must not miss the opportunity to grab it FREE from the Juggernaut App. I personally hope that it hits the bookstores soon as paper/ hardback too.

The Last Queen is a lesson in feminism, to stand up for ones rights and fight till the end to retain them. It also emphasizes that the past is not always ‘his-story’ it is equally ‘her-story’ and these voices and contributions should not be overshadowed by any means. Like all Divakaruni’s books she has held interest, brought out facts, as well as fictionalized the sequences to make it a memorable read for the audience. Female personas and psyches have always been the prime part of Divakaruni’s writing be it mythology or fiction and she has taken immense care to keep up the interest of her readers with her latest book.
Not just a regular bookish post, but this is more like an appreciation post for small businesses. The pre-covid times saw many pop ups, fairs, flea markets etc in Kolkata which came to a standstill for the past one year. But with @pilitaxipopup taking the initiative to bring back such pop-ups in Kolkata this year is going right .
Back in 2019 as a part of Hindi Sahitya Walk by @breakfreetrails , the lanes of Chitpur made me stand in front of Salim Manzil where the story of the famous Gauhar Jaan picked my interest. This stayed with me since then till I chanced upon @vikramsampath book - My Name is Gauhar Jaan.
#QOTD: Can you imagine Ghalib solving murder mysteries to writing poetry?
#QOTD: What is the worst bookish disaster you have come across 😞?
#QOTD: Does going abroad always fulfil dreams or pushes one into a web of restrictions, abuse and objectification?
#QOTD : Have you ever felt that your house helps are like newspapers and radios, keeping a tab over the whole neighbourhood?
An amalgamation of tales of day -to-day self-discovery through travel, adventures and learnings, is what best describes #LifeUnknown by @kartikeyaladha .
The very name Dhumketu transports me back to my school. Amidst long summer days when the sun was boiling over our heads, I used to sit near the window (gazing at the world outside) trying to create a visual imagery of the lines being read by my teacher. These lines from the mind of Dhumketu stuck with me then and have come back to me now- only in a different language.