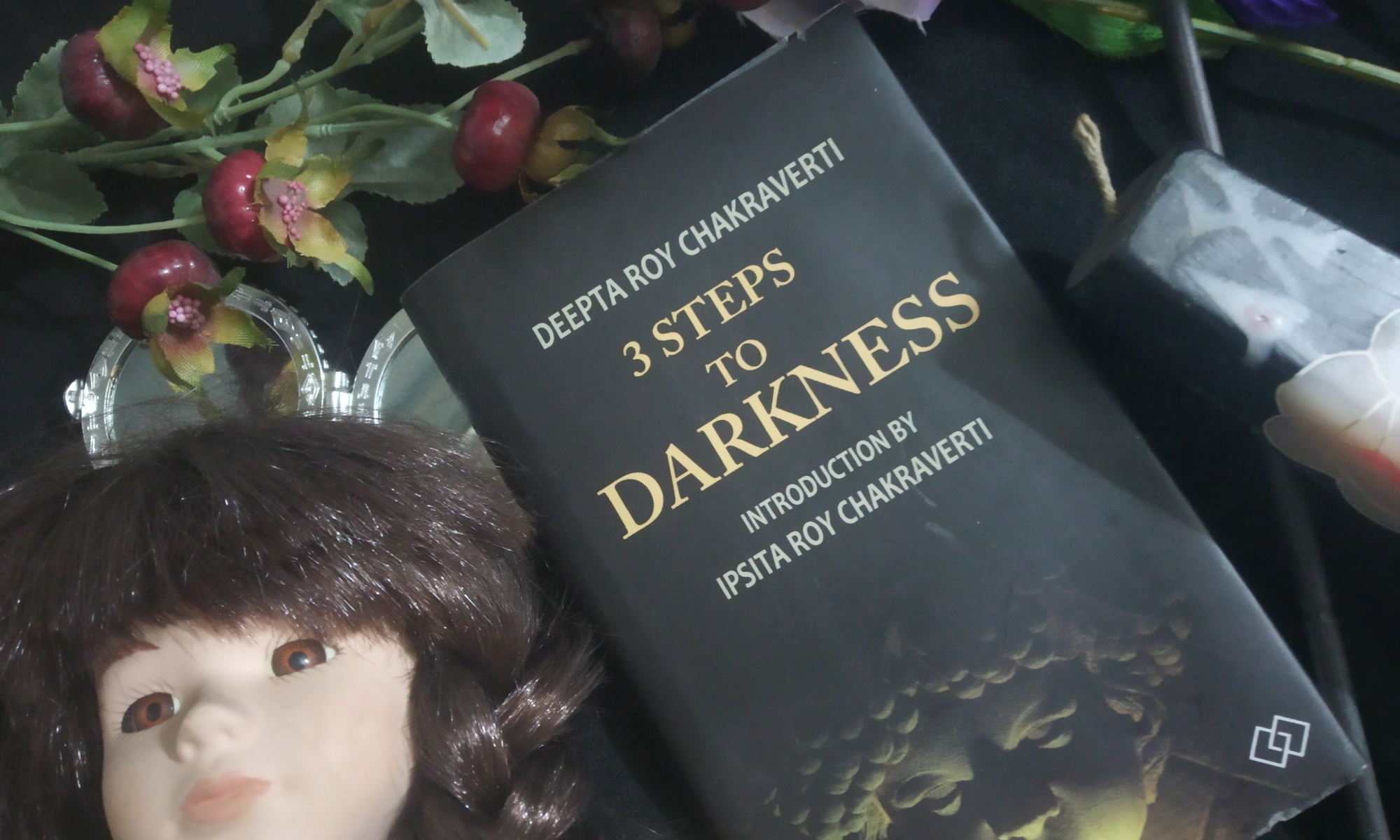 With book fair being one of my favorite hauntings in the city, I was quite happy to know that Deepta’s new book would be available there. It has been almost three years since her last book Cursed at Kedarnath was released.  Even though I missed her book signing at the Book Fair I made it a point to not miss picking up the book and added it to my book haul from Book Fair 2020.  Incidentally, the name of the book ‘3 Steps . . . . . ‘ became quite relevant because it t was only in my third attempt in visiting the stall,  that the book was finally in my hands.

3 Steps to Darkness is a portal to ancient practices that coexist with modernity through reality or the undead.  Three short stories talking of witches, fairies and dolls which are often resorted to, to satisfy one’s own desires, make up the contents of the book. What is interesting to note is that the three objects of power are synonymous with women, making the readers interpret the power of women in light or darkness.

Armed with strong characters and even stronger desires, 3 Steps to Darkness makes it for a fine read to understand the darkness within ourselves more than outside. Power, desire, jealousy, unfulfilled wishes, denial, lust, greed and more are all within and once we succumb to any of them, it is only a matter of time till evil engulfs us.

The author takes the reader through a back and forth journey, separated by decades or centuries through her writing. The detailed description of the places and people would remind you of reading a Ruskin Bond, only with a different form of depth to it. While reading you would never feel the distance between today and the era gone by. The narrative flow gives power to your imagination and creativity to visualize it in front of you.

With three different stories, of three eras and locations; it was very hard to choose my favorite.  Thus, giving you a gist of all three.

Set in Vienna today and in the 16th Century, it tells the story of Elsa and Anna; and how innocent women were subjected to witch-hunts by powerful oppressors. I have often wondered how women being hunted as a practitioner of dark arts have always been more than men. Or is it the patriarchal way of eliminating those they thought were weak? It is also interesting how those the mass looks up to and idolizes often mislead them for the benefit of strengthening their own position in society. The unimaginable torture, forget the term human rights, often lead to the formation of vengeful spirits who keep alive in their memories the injustice done to them and tell their stories in whispers, to those who can listen.

The Curse of Fairy Hill

I remember visiting Mussoorie with my parents for a vacation almost a decade ago. Even then I had felt that the cold winds and scenic beauty had much more than what met the eye! Set during the Raj, The Curse of Fairy Hill tells the story of an illustrious King and the Queen. The Queen overlooks the matters of the Kingdom winning the hearts of the people; after the King suffered an accident. The only wish she ever had was to have a loving and loyal husband; and to fulfill her desire, she wished at the Pari Tibba or the Fairy Hill. But it is often seen that what is granted to us is what we might need rather than want. And when a tweak in wish-fulfillment is met with denial of the same a boon might turn into a curse.

Like all married couples, Arun and Lila wanted a child. But to their utter dismay,  all natural and medical procedures betrayed them.  During a trip to Bangkok they met an old woman and found their Darling Child – Sunaina. But what happens when Lila gets pregnant and delivers a second child? This story highlights very contemporary situations and how a dark art is often fused in as a solution; only, is it a solution?  The family pressure of bearing a child; becoming blind in the desire of children so as to go to any lengths; the effect the arrival of a new child has on the elder one; the sadness of losing children – are all depicted in the story. But it is also intertwined with how dark arts has a feeling of its own and manifests its power by manipulating feelings and situations.

If you are into spine chilling stories then 3 Steps to Darkness is definitely the book to look forward to. You may not find ghosts and draculas here but who said subtlety cannot leave you frozen and speechless!