The Manchester Spinningfields Makers Markets came back for the third year in Manchester. This market showcased some of the best hand-made products like food, pastries, cakes, home decor, paintings and the like. What more, if you thought the maker’s markets were just for humans think again! You would find ample stuffs for your lovely pets as well. In fact, many even  brought their pet dogs along with them. Here, are some glimpses of the market.

Held, just in front of The John Rylands Library on the weekends, many people (including myself) found it a great opportunity to visit the markets and the library both on the same day. 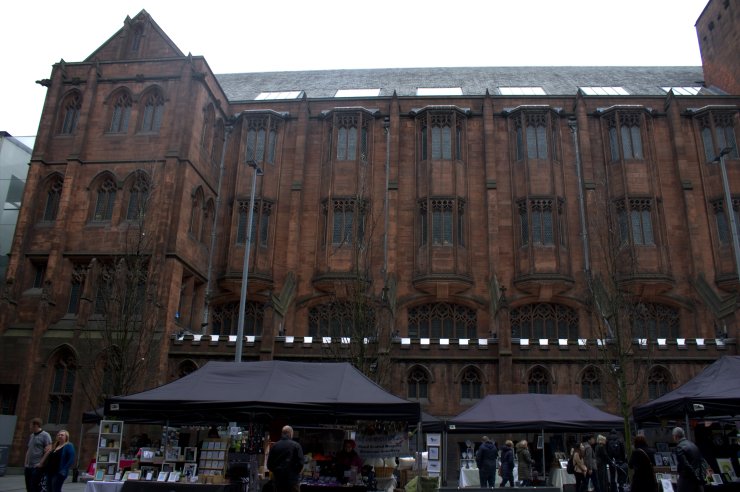 Didn’t I tell you that pets were more than welcome. Well, this little (maybe not so little) Winston was the star of the day . A really sweet dog he was extremely camera conscious and looked exactly at the camera when he was being captured in the numerous selfies and groupfies that people were taking with him. Many are actually scared of Bulldogs, but Winston would happily let people pet him and take photographs with him.

The taxidermist stall and the gardening stall really caught my eyes. The bird was just one of the samples of the many stuffed animals that were on sale. The hanging bushes with colourful flowers could make one’s day. Various hues of flowers came from all directions of the stall.

Well, I was pretty amused as I had never seen a dog inside a pram before. So, I had to capture this moment.

The market was held in an open area and thus people did feel cold after a while. But, cheers to the hot drinks van . . .

With the makers Market it would be impossible that food stalls would not be put up. Here, are some of the delicious food stalls which displayed food not only for the people but also treats for the pets.

Before bidding adieu to the market, I tried to capture a glimpse of the whole scene.

The Makers Market are held in various places across Manchester. In fact, if you would want to attend the next market it would be wise to have a look at their official website http://www.themakersmarket.co.uk/ or keep a track on Facebook to find out the timings and the place of the markets. As per my knowledge they are held on the 3rd Saturday and Sunday of every month in Spinningfields.