Sundays are actually boring for me. The same old waking up, sitting with my laptop and going to bed after dinner. But this Sunday was special. It was filled with an amazing day at the Albert Square. I was earlier informed through Facebook about the Irish Markets and Parade to take place in Albert Square (Markets from 10th-13th March and parade on 13th March); but sadly due to College, work and other commitments missed the first three days of it. But, as they say, the best is saved for the last; thus I got to see the best part of the event on Sunday.

I had arrived well before the parade was due and thus had extra time to look around. Albert Square was  unrecognisable with tents of food and souvenir items for the people, who had come to partake in the activities. There were rides for the children and makeshift cafe’s serving Irish beer for the adults. 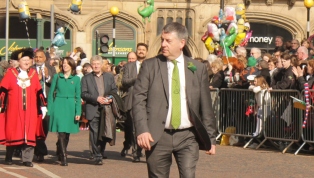 After waiting  for about an hour (well-looking around and clicking photographs to be honest), the parade started approaching. It began its journey from Cheetham Hill and ended at Albert Square. It was one of the most amazing parades I had seen in my life. From dancers, instrument players, to animals and mascots (read snake, dogs, sheep ); from trucks to vintage cars ; and most importantly the smiling faces of the people who had walked around ten miles to reach Albert Square, made the parade truly special. It would be unfair to mention the absolutely amazing security arrangements who looked after the needs of each and everyone in the audience and those in the parade.

The smile on the faces of the people, especially the children did not reflect their wait and patience under the bright sun (In fact, it was the hottest day of my life here in Manchester). The parade was exactly half an hour-long and ended at 2pm after which a huge crowd of around 1000 people dispersed. Everywhere I looked, people were enjoying and merrymaking with their friends and families. They wore Irish hats, had glasses of Irish beer in their hands, sang along the tunes of the songs being played on the loudspeaker.

On my way back home, I saw that as an extension of the festivities, Exchange Square too had arranged for various rides . They were great to look at although one particular ride (Read Height around 45 feet) looked really scary.

It was a well spent Sunday where I was introduced to Irish culture and customs and through this post would like to share it with you as well. I leave you with some photographs of the event.

AAAnd here is a glimpse of the parade in action.