Skip to content
“Autumn is the mellower Season,
and what we lose in flowers,
We more than gain in fruits.”
-Samuel Butler
It is not that I am too fond of fruits; in fact, I am a very picky fruit eater. I might like something one day and dislike it the other day. But that did not stop me from going into the wholesale fruit markets of bara-bazaar on 11th October, even if it was to only look at the place and see the various activities going on there. Here I must acknowledge that the fruit bazaar was certainly not what I had imagined; it was even better.
On entering the fruit bazaar, apart from some shops where the people were busy in packing and loading and unloading fruits from the trucks, we were greeted by a very old goat. It must be too soon for me to say, but the goat seemed to tell me that he had seen everything that possibly went on inside the mandi(popular term for the markets) and was probably waiting for a change.

Nevertheless, what interested me was that the entire place was abuzz with various activities which appealed to one’s senses. People were busy collecting fruits that had come from the trucks. While many unloaded carton full of fruits; there were others who sat and maintained records and finances of the deal. At many corners men gathered around a table and one person howled prices on top of his voice. Not knowing what it was when I went to check, I was told by another man that it was live auction at progress and those auctioneers surely wanted me to leave them in peace. 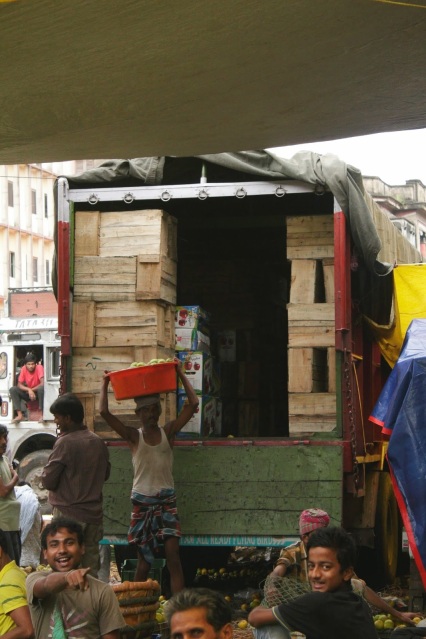 Delving further into the market one can notice that the ground had been covered by straws and hays. These were the materials in which the fruits were brought every morning and they were just discarded on the floor. This covered the floor into layers of hays and actually one can say that the ground was hardly visible. One has to walk on the “hay” floor inside the mandi. Looking up, the entire market is surrounded by houses- two or three storeyed houses. They were so old that it felt like they might fall any moment. But I prayed that they would not, at least not while I was there.
The actual market was a colorful delight. Everywhere one looked there were stack and stacks of fruits of various colors– red juicy pomegranates, huge fat pineapples, guavas, lovely peaches, delicious dates, ripe bananas, green and black grapes and the lot. But what dominated the scenes most were the green lemons. Everywhere you look there were lemons, lemons and more lemons. 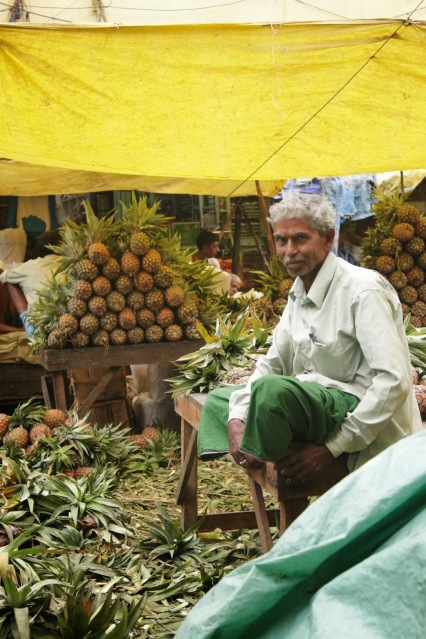 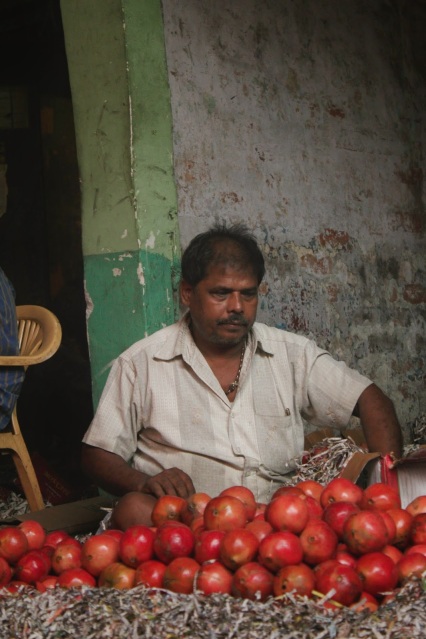 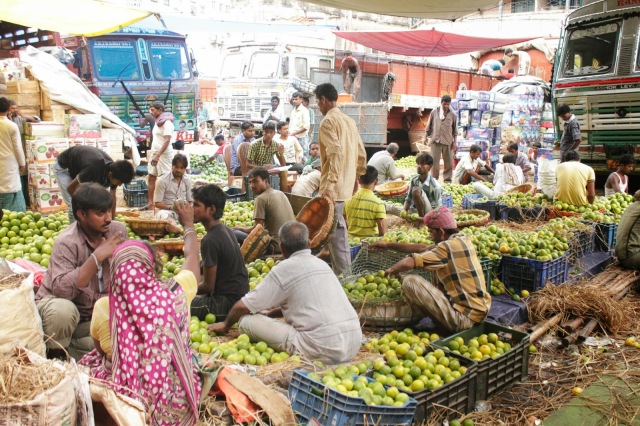 While I stopped to take the entire feel in, I realized that this is nothing but an entire colony in itself. People living in the houses had their occupations just outside their thresholds. Apart from the fruit dealers proper, there were auctioneers, truck drivers, barbers, people who owned food shops and many others.
This post would not be complete if I miss out on the reactions of the people in the mandi. It was a mostly male dominated place where I could spot an occasional sari here or there. While most of them were middle -aged, many were also young who helped their fathers or uncles in this trade. Seeing people with DSLR’s in their area they became quite thrilled and gave a variety of responses. While some willingly posed in front of the camera, some started howling at us.  Many were eagerly calling us to take their photographs and one gentleman even posed for a single shot. I was actually lucky to be able to experiment with various techniques which I had recently learned from my mentor. Though not everything came out exactly what was in my mind, nevertheless it left me satisfied, though smelling of fruits and eager to go back for some more shots.

All in all, the entire trip was worth it and made me discover a new aspect of Kolkata which I had been negligent of all this while.