Skip to content
Many a times a trip does not turn out to be what one had initially planned. Thus the second post on the Meghalaya journey by my aunt turned out to be more thrilling. With a Bandh on the list it seemed quite an adventurous position to be in , in terms of making a decision as to stay or leave. Read on to know what they exactly did throughout the second phase of their trip in this lovely land. Here it must be mentioned that due to lack of photographs all of them were taken from various sources from the internet and yes I do not run into Copyright violations.


Man proposes God disposes. That’s what my father used to say. Early next morning as we went to have our breakfast, there were rumors that there might be a bandh the very same day. Nevertheless we decided to carry on with our sightseeing plans even if it was for just half a day.
So we went to the marketplace first & it turned out to be quite disappointing. It was drizzling and we could not find anything. The women were wearing Mekhla, the traditional skirt, sometimes with a light velvet stole and T-shirt instead of traditional Dupatta and blouse. They were also wearing a wrap around dress. A few elderly ladies were wearing it traditionally and in hand woven fabric. The younger girls wore it like a long frock or evening dress in synthetic or chiffon material. We did try to speak to some of the local girls, though most of them were reluctant and shy to speak to us.
We gave up shopping soon after and went to see the Elephant falls .The falls is named such because of the structure – it is a three layered structure which has resemblance with  an elephant trunk. The falls itself is magnificent and the powerful sound of water falling on the rocks, awe inspiring. Some of my friends wore the Khasi dress and posed for pictures.

Then we started for our last destination, the Shillongpeak which offers an aerial view of the city. One can see the entire Shillong city from there. For the last time, we inhaled the breathtaking beauty of the State, the mysterious mountains, the pastel shades painted by the greatest artist of all times.

We did not have time for the Butterfly museum and Hydari Park. Perhaps we should have skipped the attempt at shopping in the morning but it was afternoon and we decided there was no point sticking around in uncertain condition of Bandh.
We went back to hotel and made arrangements to climb down to Guwahati. The Shillong to Kolkata flights are not operational every day and the helicopter services were not available. We had to cross Mongpu where the Bandh was supposed to start by 6 pm. So, we had no other option but to make the return trip on the rental car at a supremely escalated rate. Locals informed that the Bandh might continue for more than a day. Staying back could have disrupted our future schedules.
We saw the Barapani nearer this time. The night fell before we could get down. The road curved dangerously but our driver was quite an expert. In about three hours, we reached Guwahati. We only had one stop for refreshments. In the evening dim, an unusual series of brightly lit liquor shops lined the roadside as we drew nearer to Guwahati.
The hotel we now checked into was okay but not a great one. It was located in a very congested area of Guwahati. The rooms reeked of naphthalene but the group was tired and hungry. We had to compromise.

Next day, we had breakfast at the hotel and started for the airport. On the way, we stopped at Silkalaya and did some shopping for our near and dear ones, back home. We did not have time for Kamakshya temple but we drove by Brahmaputra glistening in the morning sun. Guwahati seemed like just another city with heavy population. Roads are lined with leading Indian brands and congested with heavy traffic.
The flight took off and it was the end of our journey. We discussed when and where we would go next – a common topic on all vacations. Sweet home, hot weather and routine life beckoned us.
Himalayas still appear out of thin air, as I close my eyes… 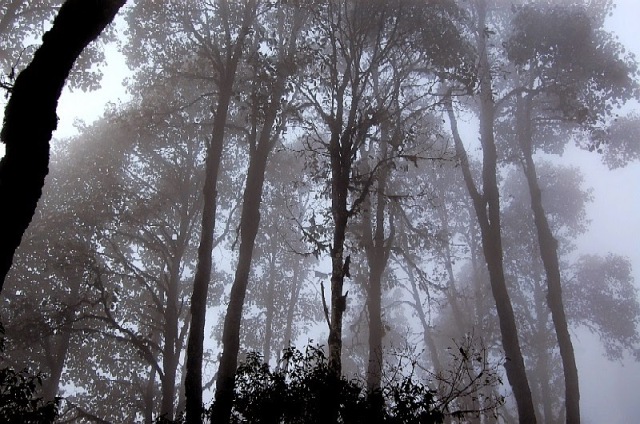